We've all heard the expression, "Don't kill the messenger."  Usually it's said by someone who is bringing you bad news, and they don't want you to take your anger out on them.  Of course, this comes from a long tradition of king doing just that--venting their frustration about bad news on the person who brought it.

If I'm honest with myself, there are probably times in my life when I have done just that.  No, I didn't pull a trigger or swing a sword, but I've definitely taken my frustrations out on those who didn't deserve it, just because they were telling me something I didn't want to hear.  Haven't you? 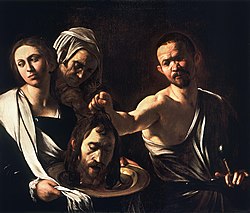 In Luke's Gospel, King Herod did just that--he killed the messenger.  John the Baptizer was a prophet who not only foretold the coming of the anointed one who might threaten Herod's reign (Herod was a puppet king under Roman authority), but John also criticized Herod's decision to marry his own brother's wife.  Long story short, John's critical message ended up costing him his head.  Luke 9:7-9 (NLT) says:

When Herod Antipas, the ruler of Galilee, heard about everything Jesus was doing, he was puzzled. Some were saying that John the Baptist had been raised from the dead. Others thought Jesus was Elijah or one of the other prophets risen from the dead. “I beheaded John,” Herod said, “so who is this man about whom I hear such stories?” And he kept trying to see him.

When I read this, I've got to ask the question--if Herod thought Jesus was John raised from the dead, why would he keep trying to see him?  Maybe he realized that he'd loosed his anger on the one person who was being the most honest with him, and he regretted it.  Maybe, after realizing his mistake, he wanted to hear more of what this messenger had to say.

When God speaks to us, we often stop our ears, not wanting to hear what's being said.  When others are critical of us, we want to kill the messenger.  But maybe the people who are the most difficult are also the people God has sent into our lives in order to teach us the lessons we don't want to learn.  You can kick a person out of your life for telling you a hard truth, but chances are that if it's something God is trying to tell you, another messenger will pop up and give you the same message.  That's what happened to Herod.  And maybe, just maybe, when he was seeking out Jesus, it's because he had enough sense to seek out the source of his frustration instead of running from it.

What message has God given you, that you didn't want to hear?  How have you avoided, ignored, or even been nasty to the people that God used to convey that message?  Here's a hint:  If you don't like the message you're hearing, learn from it so God won't have to keep repeating the lesson.

Here's a secret not everybody knows:  I took Algebra 1 four times.  I passed it with a D the first time in high school, but figured I couldn't build on that kind of poor foundation.  So I took it a second time and passed with a C.  Then, my freshman year in college I tested into Algebra 1.  I decided to take a self-paced, self-taught class, and (wouldn't ya know), because I didn't like it, I didn't do well.  So I had to take it a fourth time.  Maybe if I'd paid attention to what Mrs. Hodges taught me the first time I took it, I'd have learned and moved on. Instead, I made excuses.  I killed the messenger, saying, "This teacher is terrible!  She's confusing!  She doesn't care if I learn or not!"  But I was wrong.  Not only was she my teacher, but she was also my friend's mother and cared about me very much.  She took time out of her own schedule to help me after class.  But I didn't listen.  Instead, if I'd focused on what I needed to learn, I'd have had much better success.

Do you find you're getting the same lesson over and over again, just from different teachers?  Maybe it's time to crack open your textbook, turn on your listening ears, and learn.  Don't kill the messenger who brings a hard truth in life--they might just be your greatest teacher.
Posted by Greg at 3/22/2019 12:47:00 AM