"Teach Us to Pray" - My Article in the Southside Messenger 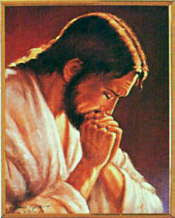 Charles Spurgeon, known as the “Prince of Preachers,” knew that the most important thing in his meetings was not preaching—it was prayer. It was said that he once took a group of students on a tour of his building, showing them the “power room” of the church. Instead of a furnace, he showed them a room full of people praying, just before the service where Spurgeon was to preach. Without prayer, Spurgeon knew his preaching would be in vain. Jesus’ disciples also knew that. They could have asked Jesus to teach them anything—how to heal, how to cast out demons, how to preach. But in Luke 11:1 they asked Him, “Lord, teach us to pray.” Jesus had sent them out to do all those other things, but they knew that without prayer they could not accomplish any of it.
So Jesus gave them the Lord’s Prayer as a model for their prayers. Many of you know the Matthew 6:9-13 (King James Version) passage by heart:

Our Father which art in heaven, Hallowed be thy name.
Thy kingdom come. Thy will be done in earth, as it is in heaven.
Give us this day our daily bread.
And forgive us our debts as we forgive our debtors.
And lead us not into temptation, but deliver us from evil:
For thine is the kingdom, and the power, and the glory, for ever. Amen.

We’ll spend the next few weeks talking about just how to do this. I hope you’ll join me for the adventure that is the Lord’s Prayer. I pray that God will bless you through it.
Posted by Greg at 6/29/2010 01:09:00 AM No comments: Links to this post

"My children...do not believe in the reform of your Order. Believe in your personal reform." 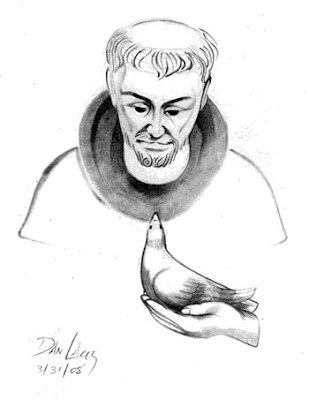 A Spiritual Vacation - My Aticle in The Southside Messenger 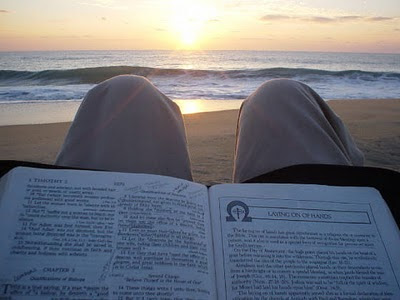 At this moment, I’m writing from the Outer Banks of North Carolina. My family and I are on vacation. I’ve been the only one awake for three hours. It’s been blissful—just me and my Bible, journal, devotion book, and a pot of coffee, in a wonderful beach house with the sound of birds singing outside. It doesn’t get any better, this side of heaven.

While on vacation, my family tends toward nocturnalism. We don’t worry about bed times, but let the kids stay up pretty late. Though my wife stays up with them, for the past two nights I’ve gone to bed before anyone else. I will probably do this all week long. This has allowed me to wake up long before anyone else and have time alone with God. I’ve needed this vacation as a time of family rest and recreation. I’ve also needed the time as a spiritual retreat, to re-focus on what God is speaking into my life.

This summer, many of us will withdraw to some place of relaxation and renewal. Don’t let anybody make you feel guilty for it—you need it. But I challenge you to make it a time of spiritual refreshment as well. Yes—you should see the sights, ride the rides, eat the fudge, and do whatever gives you joy while you’re on vacation. But also consider making your summertime trip a spiritual retreat as well. Take a significant part of each day to seek God. If you take a book with you to the beach, why not make that book God’s Word? Go ahead—plunge into the waves. But also immerse yourself in the Living Water.

The Art of Prayer says, “Cast aside everything that might extinguish this small flame which is beginning to burn within you, and surround yourself with everything which can feed and fan it into a strong fire. Isolate yourself, pray, think over for yourself what you should do… What you need most in your present position is solitude, prayer, and meditation.”

I remember my childhood vacations, how my parents would pack every minute of our time with fun and activity. They were paying for it—so we had to enjoy it! When we’re on vacation, we often think that entertainment is what we need the most. But I encourage you to seek God. Jesus told us to seek first His kingdom and righteousness, and you’ll have all these other things, too (Matthew ). Seek Him on vacation this summer. Only in Him can you find true rest and renewal.

When Jesus Stopped By for a Bier

Soon afterward he went to a town called Nain, and his disciples and a great crowd went with him. As he drew near to the gate of the town, behold, a man who had died was being carried out, the only son of his mother, and she was a widow, and a considerable crowd from the town was with her. And when the Lord saw her, he had compassion on her and said to her, "Do not weep." Then he came up and touched the bier, and the bearers stood still. And he said, "Young man, I say to you, arise." And the dead man sat up and began to speak, and Jesus gave him to his mother. Fear seized them all, and they glorified God, saying, "A great prophet has arisen among us!" and "God has visited his people!" And this report about him spread through the whole of and all the surrounding country. (Luke 7:11-17 ESV) 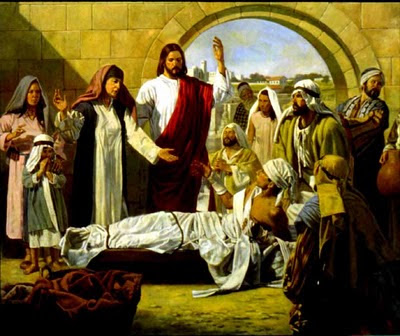 Ok, ok, Jesus didn't stop for a beer--he stopped for a bier (pronounced the same). Caught your attention, though, didn't it?

When you meet someone in a one-lane road, how do you decide who gets the right of way? Is it the biggest vehicle? Or the one that looks like it would have the greatest difficulty in stopping? This is the story of two parades that met each other in the road. One was a funeral procession, and the other was a traveling party. In , funeral processions automatically have the right-of way when they’re traveling under police escort. But Jesus was not in . He stops the funeral procession in its tracks.

In this story, the parade of death gives way to the parade of life. Jesus is the central figure in one parade, and a corpse is the central figure in the other. He who is the Way, the Truth, and the Life stops to give the gift of life to one who is dead. What parades of death do you have going on in your life? What celebrations of destruction have you joined lately? Are you willing to let Jesus stop you in your tracks, and give you His life?

Luke points out that the young man who had died was a widow’s only son. She had no husband to care for her, and now no son to look after her in her old age. This left her in a very dire situation. After Jesus raises the young man to life, Luke says Jesus “gave him to his mother.” This healing was a gift. Jesus wants to give you His gift of life as well. It’s available to you, if only you’ll receive it.

I can imagine the high emotional level of those people in the funeral procession. In Jesus’ day, people would hire professional mourners to wail and lament a person’s death. The commotion must have been tremendous! The procession had a momentum all its own. But Luke says that when Jesus touched the bier, the bearers stood still. Perhaps they stood still in amazement that Jesus was willing to touch a dead person. According to their tradition, touching a dead body made you ritually unclean for a time (Numbers ,14). Jesus was willing to take on their uncleanness, so that He could bring healing. Jesus is willing to take your uncleanness upon Himself in order to save you, too. 1 Peter (God’s Word Translation) says, “Christ suffered for our sins once. He was an innocent person, but he suffered for guilty people so that he could bring you to God. His body was put to death, but he was brought to life through his spirit.” What an awesome thing, that He’s willing to take on our uncleanness so that we can be healed!

This story also reminds me of the woman who received power when she reached out and touched the hem of Jesus’ garment (Luke 8:40-48), or the story of Uzzah who died from the shock of power he received from touching the Ark of the Covenant (2 Samuel 6:2-7; 1 Chr 13:7-10). I wonder what kind of power they felt when he touched the bier. Something sure made them stop in their tracks! How have you felt God’s power in your life? Has it caused you to stop and pay attention, so that He can do something marvelous for you?

Psalm 46:10 says, “Be still, and know that I am God.” I invite you to be still at the touch of Jesus. Let Him do something great in your life. He will cause your mourning to end. Let Him heal you. He will give you His gift of life.