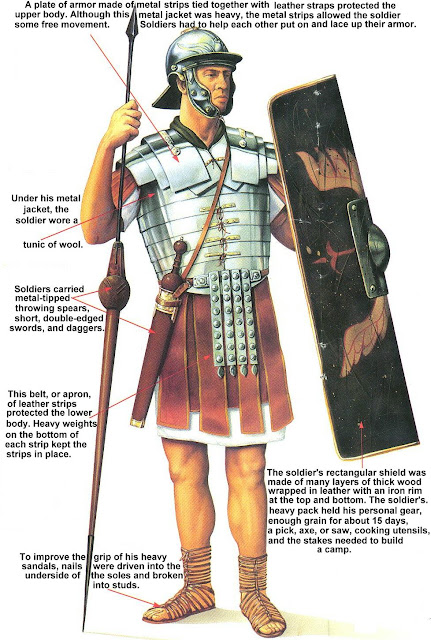 Lately, I’ve been enjoying a TV show called Deadliest Warrior.  In the show, weapons and tactics experts compare and contrast the skills and equipment of famous warriors from history and around the world.  They quantify the warriors’ strength, agility, accuracy, education, and other factors, then feed them into a computer which creates mock battles to determine who would win in a fight.  Though these warriors have never actually met in history, the computer pits pirates vs. knights, ninjas vs. Spartans, Apaches vs. gladiators to determine who the deadliest warrior would be.  Sometimes it’s skill that wins the day, and other times it’s who has the strongest armor.

Since the dawn of time, soldiers have relied on the strength of their weapons and armor to win battles.  But God gives a different strategy.  Rather than trusting in physical weapons, God tells Christians that we wage a different war that requires a different strategy.  Ephesians 6:12[i] says, “For our struggle is not against flesh and blood, but against the rulers, against the authorities, against the powers of this dark world and against the spiritual forces of evil in the heavenly realms.”  Satan is a real enemy, but we don’t meet him on a physical field of combat.  Instead, we wage spiritual warfare in defense of our Christian homes.

Every soldier I have known says that they serve their country, but this is only partially true.  In actual fact, they serve their country in order to protect their families.  When a human enemy threatens, volunteers join the military in order to protect their loved ones.  As we conclude our study on Christian homes, we focus on the battle that wages against them.  When sin and temptation threaten, we turn to spiritual warfare.  We must remember to “be strong in the Lord and in his mighty power (verse 10).”  Zechariah 4:6 reminds us that the victory comes “‘Not by might, nor by power, but by my Spirit,’ says the Lord Almighty.”  Try to win a spiritual battle on your own, and you will fail.  But rely on God’s power to fight for you, and you will have the victory.

Verses 14-17 detail the components of the full armor of God.  Salvation and righteousness invoke God’s protection for your thought life and your emotional state.  With God’s truth at your core, you can withstand enormous pressures.  Centering yourself in God’s truth also protects future generations of your family.  With the peace that Jesus gives you, you can stand and fight with no desire for retreat.  Faith shields you from Satan’s fiery darts.  The Word of God turns you from a defender into an aggressor, storming Satan’s kingdom and winning the victory.

The problem is that many Christians go into battle only partially armored (if they wear any at all).  This is a sure path to defeat.  In the eighteenth century, European army officers had long since abandoned traditional armor in favor of fashionable uniforms.  Only one piece of armor remained—a tiny metal crescent called the gorget, worn as a necklace over the collarbone.  The gorget served no real purpose.  It was simply a decoration that harkened back to the days when knights wore real armor.  Too often the Christian wears religion as a decoration, reminiscent of the days when faith was real.  Instead, believers need to put on the full armor of God, so that we can take our stand against the devil’s schemes.  Only when we do so can we walk in victory.  Only in victory can we have the hope of Christian homes in this generation, and in the generations to come.