I've never liked that song "Give Me That Old Time Religion." Something never struck me right about that line, "It's good enough for me." As if to say, "I'll settle for it," or "I know it's not much, but it's good enough."

I have never wanted to settle for "good enough." Maybe I'm an idealist. I've been called a perfectionist. I probably am, in some areas at least. In terms of the old time religion, that's probably true.

Take preaching, for example. I've never believed that the old time religion was good enough for me. Preaching has changed a lot through the years, from the days of Puritan preacher Jonathan Edwards (pictured here) with his hellfire and damnation, to the milquetoast messages of this "feel good" era. It has changed in intensity, in focus, and style.

For centuries, preaching was full of cerebral arguments, philosophical propositions, and high theology that most of the common people could never understand. That didn't matter too much, because it was mostly in Latin, which nobody could understand either. Even once preaching moved into the vernacular, its meaning usually remained unattainable. Then, a couple of hundred years ago, things started to change. Revivalism and Great Awakenings took over, and preaching moved into a whole different arena. Suddenly, the message was brought down to a level that people could understand. Popular preacher Billy Sunday (pictured here in one of his wild preaching gestures) said, “Put the cookies on the bottom shelf where the little kids can reach them, and the old folks can bend over and get them.” This is how preaching should be!

But is it good enough? A lot of things have changed since the days of Billy Sunday. For one thing, technology has changed so that we can rely on microphones to carry our voices to thousands of people at a time. That's got to change your delivery. Research has been done regarding the different methods of teaching, to accommodate various learning styles. We now know that some people are visual learners, some aural learners, and some kinesthetic learners. School teachers know this, and so they use a blackboard for visual learners, laboratories for kinesthetic learners, and lecture for aural learners. Preaching is only recently being adapted to accommodate all these learning styles.

So I preach with a PowerPoint presentation (like this one)
flashing behind me. I've only been doing it that way for a couple of years, but I've been told that the sermons are much more visually interesting. I've also noticed that people retain what's in the sermons better. They quote the sermons weeks later, whereas before they were doing well to remember what I preached on, at lunch the same day. We're beginning to use video and drama in the worship service, as well as setting up 3-D visual presentations in the sanctuary from time to time. Preaching styles have changed, but the message stays the same.

This week, the saints at Antioch celebrated God with an old-fashioned tent service. Our guest speaker, the Rev. Todd Brooking, gave messages that Billy Sunday would have been proud of. No PowerPoint, no Latin, no philosophical propositions. Just Gospel. And it was wonderful! Intelligent, and down-to-earth at the same time. Definitely spirit-filled. Believers were revived. One young man gave his heart to Jesus. I baptized five in the river, the old-fashioned way.

So I guess you can say that the more things change, the more they stay the same. Methods of delivery change, but the Gospel stays the same. My prayer is that as we progress through the generations--as our children and grandchildren become leaders and preachers and teachers--we might not be so hung up on "that old time religion" that we refuse to be open to new methods of communication. My prayer is also that those young upstart preachers and teachers with all their gimmicks might not forget that it does us good sometimes to take a step back, simplify, and just preach the Good News, putting the cookies on the bottom shelf.
at September 23, 2008 No comments: What's with all the toadstools lately? A casual stroll down your road or a drive down the street reveals that many lawns have cropped up with toadstools. From tiny to massive, these fantastic fungi have taken over our area. Has your area been overrun as well? Where did the come from? It looks like they sprang up overnight.

Cultures around the world have mythologies about mushrooms, especially when they appear in circles, or "fairy rings." Some attribute their presence to the footprints of fairies, the will of gods, and omens of the future. While I don't subscribe to these views, I do believe we can learn a spiritual lesson from these toadstools.

In a fairy ring, what seems to be a circle of individual toadstools is actually one single organism. Each toadstool is only a manifestation of that one organism. Many fairy rings have been thought to be up to 600 or 700 years old. (For more information than you ever wanted on fairy rings, click here.) In the same way, we know that each of us is interconnected. The Bible says that each Christian is only part of the body of Christ. You may look at a person and think you see an individual, but what you're seeing in reality is a manifestation, or a part, of the single organism of Christ. It is God who connects us all.

One of my least favorite songs of all time is "It's a Small World After All." Unfortunately, the song's true. We can't go anywhere or talk with anybody without encountering another aspect of the same organism we're part of--God. "In Him we live and move and have our being."

Today in a restaurant I encountered two women who really bothered me. Between them they had three children who were running around, being loud and raucous. Of course, you can't blame the 2 and 3 year old children. The women were shouting at the children, using profanity, calling them monsters, devils, and worse. I was angered and disturbed by these people at the table next to me, and wanted to fuss at these women for their behavior toward their children. But then I thought of the toadstools. We're all connected. What you do to one affects everyone.

So instead I decided to be an encouragement. I smiled, admitting that sometimes I get frustrated with my children too. I told them that their children really were little angels--even if they weren't acting like it at the moment. This started a 20-minute conversation about child rearing, and the entire tone of the afternoon changed.

So the next time you feel like stomping someone like a toadstool, remember that they're one of God's precious people. Remember that we're all connected. There's more than just fairies in this ring. There's the Spirit of God.
at September 17, 2008 No comments:

A Good Day at Church


Today was a good day at church.

Of course, every day is a good day, when you get to go to God's house. But today was especially good. Here's why:

1 - I came into church, feeling like I was fully prepared. Sermon notes printed out, nothing to do but worship.

2 - The praise team started something new today, starting the early service early (yes, I did mean to say "early" twice) with informal singing of contemporary praise songs. I don't know if anybody else felt the Holy Spirit moving that early in the morning, but I sure did. It got me fired up and ready to go.

3 - Sometimes I feel like I preach well at one service, but not so well at another. Today I slipped into the groove that God carved out for me in both services.

4 - A potentially difficult problem had a solution that God presented--an answer separate from any of the solutions that the involved parties had had in mind. Not only a mutually acceptable solution, but actually a solution that's an answer to many people's prayers, and that everybody can get excited about! How often does that happen???

5 - Somebody joined the church today.

6 - Several people wanted to talk about being baptized.

7 - Somebody with the gift of encouragement asked me for ideas as to how she could give gifts, commit random acts of kindness, et cetera, to give a boost to local pastors. What a blessing!

I suppose there were plenty of other good things that happened today, but 7 just seems like a good number for me to bring it to a close. Sometimes you just have to celebrate when there's a good day at church! Praise God for His faithfulness!
at September 14, 2008 1 comment:

Function Over Form: An Observation of Nerdiness 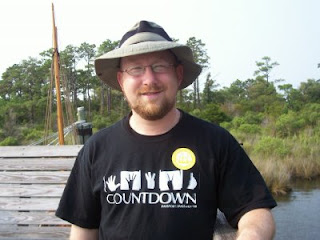 My teenage daughter hates this hat. She says it looks like a cross between a floppy lampshade and a mosquito net.

But I love it. It keeps off rain and sun, and can be balled up into any shape, then put back on the head looking no worse than before. (Maybe the reason it looks no worse than before is because it couldn't possibly look any worse.) But this hat makes a lot of sense.

Thinking of this makes me realize the essence of nerdiness--function over form. Think about it. Pocket protectors make a lot of sense. They protect your pocket from messy ink leaks, AND they have the added benefit of allowing you to load twenty pens into your pocket in one quick movement. Who cares if it looks horrible--it works!

Now, I don't wear a pocket protector (though I won't pretend I didn't own one back in the 1980s). I realize that style is important. But nerds recognize the importance of function over form. The function of a thing is more important than its style. After all, who am I trying to impress?

Non-nerds, on the other hand, can be so preoccupied with form that they deprive themselves of perfectly functional tools, just for the sake of fashion.

I'm sure if I tried, I could think of some great philosophical or theological truth that this illustrates, but I'm too tired to try today.

Last week we went on vacation to the Outer Banks of North Carolina. During the day we visited parks, shops, museums, and of course the beach itself. A couple of times, our fifteen-year-old daughter Emily volunteered to babysit for us while Beth and I walked the beach at night. How different the beach is from day to night!

Daytime life at the beach includes sea gulls, sand pipers, scantily clad sun worshippers, and only the occasional sand crab. But the sand crabs rule the night! Everywhere we walked, sand crabs skittered across our path. Sandal-wearers beware! They're like cockroaches in a New York tenement. Some are the size of a quarter, but other gargantuan crustaceans lord it over their smaller siblings. These bullies of the beach disturb the peace everywhere you walk.

Or so I thought.

We were walking the beach at night, trying desperately to avoid these disgusting nuisances when we came across a young family with four children. Each child had a flashlight and a net, and they were having a blast in their nocturnal hunt. Kids were giggling, parents were smiling, and crabs were providing the evening's entertainment.

Then it hit me.

Crabs are only crabby in your mind.

Each of us has the ability to define our experience of the crabs in our lives. We can either let them disgust, threaten, and annoy us, or we can make them our entertainment. We can see them as the comic relief that they really are.

So I decided to celebrate the crabs in my life, and enjoy my crustacean elation.
at September 03, 2008 No comments: