Christian Homes: "As to the Lord"

Some denominations practice infant baptism.  Others prefer to dedicate their babies to the Lord, and leave the baptisms until an older age.  On Mother’s Day, three families in our church dedicated their children to Jesus.  Meanwhile in southern India, some Hindus practice a similar dedication, giving their young daughters to the service of the goddess Yellamma.  But unlike Jesus who asks for our love and devotion, Yellamma asks her devotees to give their bodies to the terrible practice of temple prostitution.  As young as four years old, girls are dedicated.  Around the onset of puberty these girls begin to service the male worshippers at Yellamma’s temple.  Fortunately, Christians are sharing the truth of the Gospel with them and helping those who convert from their old life to find new homes, employment, and a new identity in Christ.

In the ancient city of Ephesus, life was much the same for the young temple prostitutes who were dedicated to Artemis.  Ephesians believed that when a male worshipper joined with a prostitute whose body was possessed by the goddess, he was uniting with Artemis herself.  You can imagine how popular the Artemis cult was with male Ephesians, and the level of degradation that these young women experienced in the name of religion.  The sex cult of Artemis affected not only the prostitutes, but nearly all the women of Ephesus.  Imagine being married to a “pious” man who felt justified in his many trips to the temple!  All of this contributed to the degraded status of women in Ephesus.

You can understand how attractive Christianity became to the women of Ephesus.  Christianity offered forgiveness of sin and renewed purity for those who became the “bride of Christ.”  In addition, some reports say that Jesus’ own mother who feared for her life in Jerusalem had relocated to Ephesus.  If these accounts are true, then Mary’s presence must have elevated the status of Christian women even more.  Surely she took these former prostitutes under her wing and became a living example of what a Christian woman should be.

It is with all this background that we approach Ephesians 5:22 which says, “Wives, submit yourselves to your own husbands as you do to the Lord.”  While offensive to many modern Americans, this verse and the following two verses must be understood in its context of Ephesians 5:21, which says, “Submit to one another out of reverence for Christ.”  Wifely submission is in the context of mutual submission.  Husbands must submit to their wives as well, as we’ll learn in next week’s scripture.  Rather than advocating male domination of women, verse 22 instead originally gave hope to Ephesian women.   “Submit yourselves to your own husbands” sounded awfully good to former prostitutes who had once submitted to everybody’s husbands.  Now, these newly converted women simply had to submit themselves to the care and nurture of Christian husbands who wanted to heal their physical and emotional wounds and help them become the pure women God created them to be.

“As you do to the Lord” reminds women that their husbands are not their masters.  Rather, Jesus is Lord of their lives.  Colossians 3:24-25 says, “Whatever you do, work at it with all your heart, as working for the Lord, not for human masters, since you know that you will receive an inheritance from the Lord as a reward. It is the Lord Christ you are serving.”  Submit to God, the apostle Paul says, and the rest of your marriage will take care of itself.  Next week, we’ll continue to examine the joy of mutual submission within marriage as we talk about the husband’s role.  I hope you’ll join me then.

In these weeks between Mother’s Day and Father’s Day, I want to spend some time with you talking about Christian homes.  Psalm 68:6 (NIV) says, “God sets the lonely in families.”  From the day that God created Eve for Adam, God was in the business of making marriages.  The Lord gave them beautiful children, and the human population has been growing ever since.  Sometimes, families have made godly choices, and other times they have made worldly decisions.  Nevertheless, God still draws us to Himself.

Today, families are under attack.  Satan, the “Father of Lies (John 8:44)” has deluded half our nation into believing that the government has the right to change the definition of marriage from God’s original intent.  In reality, government can no more redefine the meaning of marriage than it can redefine the meaning of words like “table” or “itchy” or “murder.”  (Wait…sometimes government tries to redefine “murder” as well.)  The problem is that government forgets that it didn’t invent marriage.  From the beginning, marriage was never a human institution.  It was created by God, to be for one man and one woman, for life.   A government that thinks it can redefine marriage as something that it’s not is a government that believes itself to be God, instituting things like right and wrong at the whim of the people.  Such a government has lost its moral compass, along with the people who believe that morality is a relative thing to be decided by a vote.

Isaiah 5:20-21 says, “Woe to those who call evil good and good evil, who put darkness for light and light for darkness, who put bitter for sweet and sweet for bitter. Woe to those who are wise in their own eyes and clever in their own sight.”  Isaiah laments the spiritual plight of those who call sin acceptable.  He grieves for those who use words like “intolerant, bigoted, or stupid” to describe people who uphold the truth of God’s word and the morality that God calls His people to endorse.

The author of Ephesians 5:15-18 (NIV) says, “Be very careful, then, how you live —not as unwise but as wise, making the most of every opportunity, because the days are evil.  Therefore do not be foolish, but understand what the Lord’s will is.  Do not get drunk on wine, which leads to debauchery. Instead, be filled with the Spirit.”

These words are just as true today as they were nearly two thousand years ago.  Rather than following the opinion of godless society in evil days, God’s word calls us to godly wisdom.  God calls people foolish who don’t seek to understand what His will is, but instead allow good and evil to be defined by their own flawed opinions.  Sin will always be popular, but God calls His people to holiness.  Instead of being controlled by vice, Christians should be filled with the Spirit.  Only when we allow the Spirit of holiness to influence our decisions, rather than following the politically correct opinions of ear-tickling, vote-seeking politicians, can we know true wisdom in these evil days.

I invite you to journey with me for the next six weeks as together we find out what the book of Ephesians says about Christian homes.  Maybe you’ll be inspired.  Perhaps you’ll get angry.  Hopefully, you’ll be challenged by God’s word, and decide to commit your family to living a godly life.
Posted by Greg at 5/14/2012 10:25:00 PM No comments: Links to this post 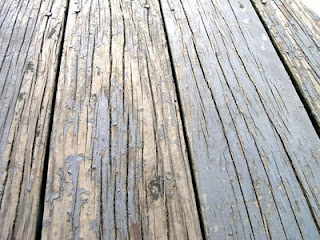 From now until the end of June I will be busy spiffing up our home.  My eldest daughter is getting married (gasp) and wants to have the wedding reception in our back yard.  Among many preparations, I need to take care of the floor surface of our deck, which shows signs of years of abuse and lack of upkeep.

“Never fear,” I said to myself.  “I can just flip the boards.”  While a deck’s surface can get ridiculously worn, every board has two sides.  To give a deck a like-new look, all you have to do is flip the board and stain the fresh surface.  Easy.  While I’m no carpenter, I have done it before myself.  But only on decks that were constructed with nails.  This deck, however, is screwed.  Nails you can pull up with a hammer and cat’s paw.  Screws must be (of course) unscrewed.  This sounds easy—so long as the screws aren’t too stubborn.  Stubborn screws will stay stuck, no matter how much torque you apply.  And if your super-powerful cordless drill gives it too much torque, you may just end up stripping the screw heads.  After that, there’s nothing to be done, unless you want to drill out each screw (which I don’t).

On my deck, some of the screws lifted out nicely.  But others wouldn’t respond at all to the overwhelming force of my Craftsman Contraption.  Instead, the screwdriver bit just skipped up and down, tearing the screw head until it bore no resemblance at all to anything that could be removed.  That’s when I wanted to throw my tools and start cussing.  But I didn’t.  Instead, I moved to another screw and smiled when it responded favorably to the loving guidance of my drill.  Zip.  Zip.  Zip.  Three more came up with no problem.  After I’d had my discouraged machismo re-inflated by the screws that responded favorably, I had enough composure to return to work on those stubborn screws once more.

Sometimes leading people can be frustrating.  Often people can be like those stubborn screws.  No matter how much you try to move them, they just won’t budge.  Instead of having a tool-tossing tantrum, why not just smile and move on to someone else who will respond to your gentle coaxing?  Don’t let unmovable people get you down.  Instead, focus your attention on those who can be moved.  And who knows—maybe after a few successes, you’ll have enough confidence to return to the sticky screws and get the job done.

Some boards, however cannot be flipped.  On my deck, I had to eventually face the fact while many of the screws came up with no problem, there were enough stubborn screws to make my boards unflipable.  Rather than getting discouraged, the problem forced me to rethink my approach and realize that there’s more than one way to make my deck beautiful.  Time to get out the power sander and smooth out those splinters.

If God has called you to lead people, you may be blessed with a whole deck full of movable screws.  On the other hand, sometimes you find so much resistance that the group just can’t be flipped.  Don’t despair.  There are other ways to make your deck beautiful.  In Revelation 21:5, Jesus says, “Behold, I make all things new.”  Ecclesiastes 3:11 says, that God “has made everything beautiful in its time.”  Trust God to help you with the repair work that your group needs.  Wait on His timing.  Let the Master Carpenter do His work.
Posted by Greg at 5/07/2012 10:06:00 PM No comments: Links to this post