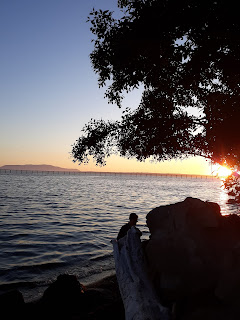 This past Monday night, I visited a local Bellingham church called Echoes.  It's a church--but not like most churches you've been to.  They don't meet on Sunday mornings.  Instead, they meet on Monday evenings.  Their schedule rotates around four types of gatherings.  Sometimes it's "Indoor Church," which is what you'd think--church that feels a bit more like church.  Other times it's "'Hamster Church," where they invite 'Hamsters (locals from Bellingham) to speak or be interviewed.  Then sometimes it's "Creative Church," which centers around spirituality and the arts.  This past Monday, it was "Wild Church," where once a month they meet in the great outdoors and experience God in nature.  I was excited by the blurb on their website, which said: 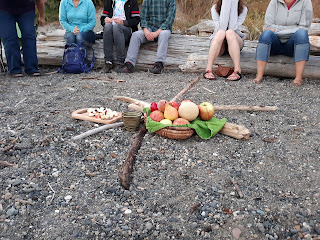 From ancient times it has been widely acknowledged that there are Two Books from which we can know God: Scripture and Nature. Echoes is newly affiliated with The Wild Church Network, and we’ll be practicing at least one wild church gathering each month.

The theme of ReMEMBER will echo through the rocks, trees, mountains and ants, calling to us to listen and reflect on the reality of Christ, present in all things, holder of our stories and memories.

Wild Church is an opportunity for us to develop spiritual practices that draw us deeper into relationship with the sacred in our own untamed hearts, in our watershed and with our undomesticated God.

Wear appropriate clothing and footwear for the weather.  Bring a short chair, a blanket, journal or other creative materials that will help you have a conversation with nature. 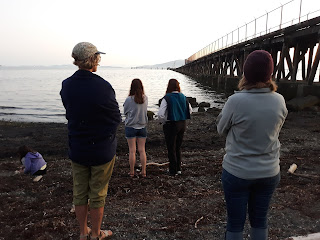 When I arrived, I wasn't sure exactly what to expect.  What I found was a gathering of about twenty-five people from all walks of life, who loved each other, love Jesus, and welcomed me with that same love.  We shared in a devotional time, spent about forty-five minutes in quiet reflection enjoying nature, came back and shared our experiencces.  We celebrated Communion with chopped apples and hot cedar tea.  We sang, we talked, we hugged.  And it was church--only different.

In the past year, I've learned to let go of possessions.  Moving from Virginia to the Pacific Northwest in the winter, I couldn't bring my truck and travel trailer across the mountainous country in the snow, so I left them behind and moved with three suitcases of stuff.  I lived with those three suitcases of stuff for seven and a half months before I was able to go back to Virginia and get my things.  Even then, I could only take back with me about a thousand pounds of belongings, since it had to fit into the back of my pickup and since I was towing a trailer and was limited by the towing capacity of my vehicle.

In essence, I've learned to live with very little.  And be content with that.  Did I miss my things, in the intervening time when they were in Virginia and I was on the West Coast?  Sure.  But I learned not to be attached to them, to not long for them.  I learned to feel complete without them.  And now that I have them, I recognize the extra work it's going to take in my life to take care of those things.  It'll take extra time to maintain what I own.  It's definitely worth it--but it's also a fact that having fewer things allows for a simpler life.

In contrast, I know some people who are hoarders.  Their homes are crammed, wall-to-wall, floor-to-ceiling, with stuff.  They think they possess their possessions, but in reality, their possessions possess them.  They have become slaves to their belongings, so much that the lack of space in their homes constricts them and keeps them from fully functioning.

Kitchen counter space is taken up by so much clutter that there's no room for meal prep--so they eat unhealthy, prepackaged meals that they just microwave, or they go out to eat too much.  Both of these alternatives to real meal prep are expensive both to bodily health and to the wallet.

When I visit them, chairs and couches are covered with so much stuff that I am forced to stand during the visit.  The lack of space leads to lack of hospitality, which also leads to lack of friends.

And on and on.  Their possessions possess them.  And that's demonic.  Maybe that's hyperbole and maybe that's not--I'm not the one to judge.  But I do believe there's something  spiritually oppressive happening when a person is held captive by their own belongings.  Demonic possessions may not always take the form of a person foaming at the mouth and spewing profanity.  Sometimes possessions simply fill up and crowd out a person's life until there's no room for God.

As I write this, I wonder--what's your relationship with your stuff?  Do you NEED your things, or could you be content without most of them?  Do you control your belongings, or do your possessions possess you?