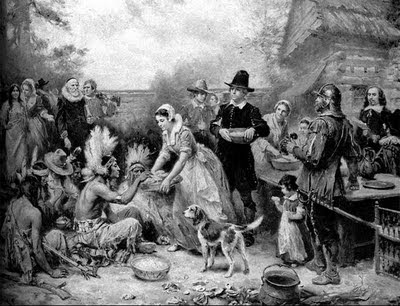 New Englanders want to lay claim to the first Thanksgiving service in America, but we Virginians know that it really happened in Jamestown, in the year 1610. The Jamestown colony started well, laying the foundations in faith. Captain John Smith wrote about the first church in the new land: "When I first went to Virginia, I well remember we did hang an awning (which was an old sail) to three or four trees to shadow us from the sun; our walls were rails of wood, our seats unhewed trees, till we cut planks; our pulpit a bar of wood nailed to two neighboring trees; in foul weather we shifted into an old, rotten tent, for we had few better…This was our church till we built a homely thing, like a barn, set upon crotchets, covered with rafts, sedge, and earth; so were also the walls...Yet we had daily common prayer morning and evening, every Sunday two sermons, and every three months communion till our minister died."

Soon, however, the colonists took their faith in gold more seriously than their faith in God. They also abandoned their farming in exchange for searching for the yellow stones, hoping to barter and trade with the Indians for their winter supplies. But when Smith left the colony, tensions grew between the indigenous people and the settlers. The Powhatan Indians refused to trade with the English, thus leaving them without provisions for the winter of 1609-1610. This period would be known to historians as The Starving Time—when colonists resorted to eating shoe leather, horses, and the bodies of people who had died of starvation. Of the original 490 colonists that Smith left in the autumn of 1609, only 60 remained in the spring of 1610.

They decided to abandon the colony, boarded a ship, and followed the river downstream. At the mouth of the James, they encountered a flotilla of English ships, led by Lord Delaware, filled with supplies and fresh colonists. The bedraggled survivors returned the Jamestown, encouraged by the bounty and provision. The Rev. Mr. Buckle held a service of thanksgiving to God, filled with songs of praise that were heard even by the Indians who sat on the outside of the assembly.
Simply put—there would have been no Thanksgiving without the Starving Time. We must go through struggle and trial and hardship in life, if we are to be brought close to God. The prophet Amos said, “’The days are coming,’ declares the Sovereign LORD, ‘when I will send a famine through the land—not a famine of food or a thirst for water, but a famine of hearing the words of the LORD (Amos 8:11 NIV).’”
God designs the starving times that we go through in order to make us hungry and thirsty for God.

Is this Thanksgiving a struggle for you? Do you feel like you’re in your own personal Starving Time? Remember that there can be no Thanksgiving without a struggle. Let the lean times bring you closer to God. Thank Him, in advance, for the sustenance you need—even if you don’t see it yet. Then wait, and see the salvation of God.
Posted by Greg at 11/23/2009 10:48:00 AM