Song of Songs - Falling in Love with God

Today is the second day of our 25th week, reading the Bible through together in a year.  Our scriptures today are:  Song of Songs 1-3; 1 Thessalonians 5; Psalm 72. 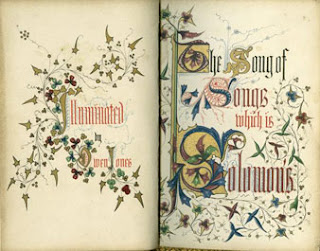 This morning, I want to introduce to you the The Song of Solomon, AKA The Song of Songs, AKA The Canticle, AKA The Canticle of Canticles.  Many have wondered just why this book is included in the canon of scripture.  Due to its erotic nature, parents and church leaders throughout the centuries have discouraged children and even unmarried adults from reading this book.  As a youth, I remember coming across these pages in my Bible and thinking, "Oh ho ho--what is this???"  There may be two answers as to why we find such a titillating love song in the Bible.

First, there's much to be said for the sanctity and beauty of romantic and sexual union between husband and wife.  It's something worth celebrating.  Married couples who are struggling with intimacy issues should read this poem together with fresh eyes and ears that are open to hear God's will for their ongoing romance.

Next, many scholars believe this poem to be analogous to God's love for His people.  Jewish theologians (eg. The Targum) have said it represents the relationship between God and Israel, while Christian teachers (Origen and Bernard of Clairvaux, for example) draw a parallel between Christ and the church.  Either way, the language of love becomes symbolic rather than literal.  Yet even interpreting this poem symbolically, the reader does not lose the sense of exhilaration to be found in the presence of the Almighty.  The romance between the Lover and the Beloved goes on in our hearts.

In his first out of 85 sermons on the Song of Songs, medieval theologian Bernard of Clairvaux point out that the title includes the name of Solomon.  The ESV renders it:  The Song of Songs, which is Solomon's.  Bernard reminds us that the name Solomon means "peaceful," so it could truly be read, The Peaceful Song of Songs.  In point six of his sermon, Bernard says, "Solomon, at the head of a book which opens with the token of peace, with a kiss. Take note too that by this kind of opening only men of peaceful minds, men who can achieve mastery over the turmoil of the passions and the distracting burden of daily chores, are invited to the study of this book."

Bernard goes on to say that the mysteries to be found hidden within the pages of the Song of Songs are not to be found easily or by the immature.  In point twelve of his first sermon, he says, "The novices, the immature, those but recently converted from a worldly life, do not normally sing this song or hear it sung. Only the mind disciplined by persevering study, only the man whose efforts have borne fruit under God's inspiration, the man whose years, as it were, make him ripe for marriage years measured out not in time but in merits - only he is truly prepared for nuptial union with the divine partner."

In this first sermon, Bernard says that this canticle can truly be called the Song of Songs, because it surpasses all the other psalms in the Bible.  The Psalms of Ascent, he says, may be an excellent way to sing your way up to the inner chamber of God's presence.  But the Song of Songs represents ascending the couch of the Lover Himself.

So, which is it--simply a love poem that was included in the Canon as an example of righteous marital intimacy?  Or an allegory about God and His people?  My answer is--yes!  As you read the Song of Solomon, I hope you'll open your heart to understanding it both ways.
Posted by Greg at 6/25/2013 11:39:00 AM