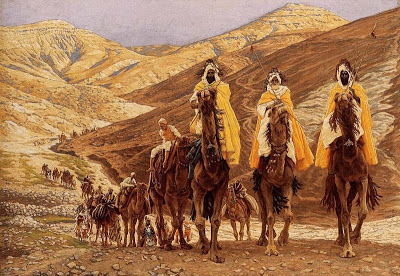 Sometimes we lose things, like (putting glasses on head) saying, “Where are my glasses…where are my glasses?”  It’s no big deal, really, when it’s something like your tie tack back or even your glasses.  But what about when the thing you’ve lost is—hope?

The Jewish people in Babylon had lost hope.  They had been separated from their Jewish brethren now for centuries, and were isolated.  The one hope they held onto was the memory of a teaching their ancestors had received from the prophet Daniel.  Remember—Daniel had become the chief of all the astrologers, diviners, and magicians in Persia.  He had passed on to both the Jews and his gentile disciples the teaching that one day a Messiah would come to the people of Israel.  But now generations had passed, and still the Messiah had not come.  Then one day, hope shone like a bright light in the form a star that appeared over Israel—a star that the astrologers knew pointed to the promised One.  So they decided to follow the star to Israel and discover this newborn King.

Assuming that the King would be born in the royal palace in Jerusalem, the Wise Men first paid a visit to Herod, the puppet-king whose rule was sanctioned by Rome.  When they asked, “Where is the one who has been born king of the Jews,"[i] Herod had no idea what they were talking about.  But the religious leaders knew.  They pointed the Magi to the prophecy of Micah, which said, “But you, Bethlehem Ephrathah, though you are small among the clans of Judah, out of you will come for me one who will be ruler over Israel, whose origins are from of old, from ancient times."[ii]

Bethlehem was not what the Wise Men expected, yet at hearing God’s word through the prophet, they chose to follow the Lord’s direction instead of their own expectations.  They made a detour from their journey to Jerusalem and set their faces toward Bethlehem.  It was there that they found the Christ Child, and gave him gifts of gold, frankincense, and myrrh.

At times, we can be like the Wise Men—looking for Love in all the wrong places.  We try to find God at church, but we won’t find Him in the stained glass, beautiful cantatas, or Christmas decorations.  At church we’re pointed to the real place where we can find God—in a much more humble location, in our own hearts.  I hope that you’ll listen to God’s word as it comes to you this Christmas.  I hope you’ll find Him, even if it’s where you least expect Him.
[i] Matthew 2:2 NIV
[ii] Micah 5:2 NIV
Posted by Greg at 12/23/2012 08:03:00 PM