My sermon from this year's Christmas Eve service 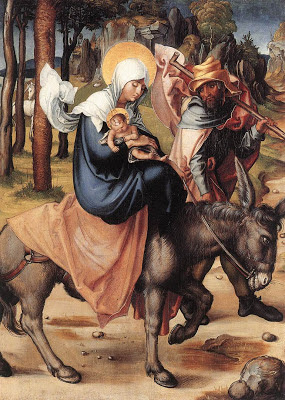 The Flight to Egypt
13 Now when they had departed, behold, an angel of the Lord appeared to Joseph in a dream and said, “Rise, take the child and his mother, and flee to Egypt, and remain there until I tell you, for Herod is about to search for the child, to destroy him.” 14 And he rose and took the child and his mother by night and departed to Egypt 15 and remained there until the death of Herod. This was to fulfill what the Lord had spoken by the prophet, “Out of Egypt I called my son.”

Herod Kills the Children
16 Then Herod, when he saw that he had been tricked by the wise men, became furious, and he sent and killed all the male children in Bethlehem and in all that region who were two years old or under, according to the time that he had ascertained from the wise men. 17 Then was fulfilled what was spoken by the prophet Jeremiah:
18 “A voice was heard in Ramah,
weeping and loud lamentation,
Rachel weeping for her children;
she refused to be comforted, because they are no more.”

The Return to Nazareth
19 But when Herod died, behold, an angel of the Lord appeared in a dream to Joseph in Egypt, 20 saying, “Rise, take the child and his mother and go to the land of Israel, for those who sought the child's life are dead.” 21 And he rose and took the child and his mother and went to the land of Israel. 22 But when he heard that Archelaus was reigning over Judea in place of his father Herod, he was afraid to go there, and being warned in a dream he withdrew to the district of Galilee. 23 And he went and lived in a city called Nazareth, so that what was spoken by the prophets might be fulfilled, that he would be called a Nazarene.

It’s called the Massacre of the Innocents – Herod’s slaughter of the children of Bethlehem. We read an account of brutality like this and we say it is horriffic - and it was.  Unfortunately, it sounds all too familiar.  We continue to see images and read stories from Newtown, Connecticut.  We say that such a thing must come from some satanic source--and it does.  But we must remember that these are not isoated incidents.  Since Abel's blood wet the earth, Satan has demanded the death of our children.  Herod's horror simply mirrored Pharaoh's murder of the Israelite firstborn--and so it goes through the pages of time.
One preacher writes:

“Abortion, child sacrifice, and other forms of infanticide were both legal and acceptable in pagan societies from the earliest times. One of the major signs of depravity in ancient Rome was that its unwanted babies were abandoned outside the city walls to die from exposure to the elements of from the attacks of wild foraging beasts. The primitive Canaanites threw their children into great flaming pyres as a sacrifice to their god Molech. Is our contemporary society any less depraved because it delivers many of its unwanted babies to the hospital incinerator instead of the local garbage dump? Abortion today is even more vicious than the decadent practices of the Romans and the Canaanites since it has been commercialized and is “big business” for certain doctors and clinics. Our society has lost its fear of God.” [i]

And so it should come as no surprise to us when violence rules our nation, when the streets of America cry out with the blood of its children, even as the streets of Bethlehem cried out so many centuries ago.  Rachel is still weeping for her children.  The beauty of the Christmas story is tainted by violence.  The red in our bows remind us of a different crimson.  And like that first Christmas, our silent night ends with a journey into the wasteland, a journey into Egypt.  We ask ourselves, “What is the meaning of it all?”

What does God do with us when our stories are not so beautiful?  As people of faith, how do we deal with our journey into the desert?  We must understand that throughout the ages, God has used the desert experiences of our lives in order to show us that He knows what He’s doing.  He uses the wasteland to get us to trust Him for the present, and for the future.

“Missionary statesman Hudson Taylor had complete trust in God's faithfulness. In his journal he wrote:
Our heavenly Father is a very experienced One. He knows very well that His children wake up with a good appetite every morning... He sustained 3 million Israelites in the wilderness for 40 years. We do not expect He will send 3 million missionaries to China; but if He did, He would have ample means to sustain them all... Depend on it, God's work done in God's way will never lack God's supply.”[ii]

Perhaps you’re in the desert right now, and God is showing you that His provision is still there for you.  Whether you’re out of a job, or in fear for your job; whether you’re struggling to make ends meet or struggling to trust Him for the meat to put on your table—God is using this desert experience to get you to trust Him.

Sometimes, God uses the desert to put His people on Probation – The Israelites wandered in the wilderness for 40 years because of their sin.  During that time, God purged the sin from His people.  They learned that they couldn’t do things their old, rebellious way.  They had to do things God’s way.  I know some people who have been incarcerated.  After they were let out of prison, they had a time of probation—of testing, to see if they really would keep their noses clean.  During that time of probation, there’s often a lot of temptation that people go through.  God uses this to see if they will go back to their old ways.  Maybe you’re in a wilderness time, and it’s a time of testing, a time of probation.  God wants to see what you’re really made of—whether you will trust Him to help you through those temptations.  Whether you will trust Him to help you live up to His calling.
Though it rarely makes sense at the moment, at times God uses the wilderness as a place of Protection.  Though it seems difficult, God may be sending you into the desert to protect you from something worse.  God led the Holy Family out of Bethlehem to nearby Egypt, to protect them from Herod’s threat.  The border of Egypt was only 60 miles away from Bethlehem.  Egypt, too, was a Roman territory, but crossing its border was not something that Herod had the authority to do.  Also, there was a significant Jewish population in Egypt, so Joseph, Mary, and Jesus could spend time among their own people while in exile.

You may be in a wilderness place in your life—but who knows?  Maybe God has placed you here to protect you from something worse.

God sometimes causes His people to journey to the wasteland in order to fulfill Prophecy.  Verse 15 says, “This was to fulfill what the Lord had spoken by the prophet, ‘Out of Egypt I called my son.’”  Here, Matthew shows the ultimate fulfillment of a prophecy made in Hosea 11:1.  While the prophet had been talking specifically about the nation of Israel coming out of Egypt generations ago, Matthew brings a more messianic understanding to Hosea’s words.

In VV. 17-18, Matthew quotes Jeremiah 31:15, saying:
17 Then was fulfilled what was spoken by the prophet Jeremiah:
18 “A voice was heard in Ramah,
weeping and loud lamentation,
Rachel weeping for her children;
she refused to be comforted, because they are no more.”

“that prediction was accomplished in Jeremiah’s time, when Nebuzaradan, after he had destroyed Jerusalem, brought all his prisoners to Ramah (Jer. 40:1), and there disposed of them as he pleased, for the sword, or for captivity. Then was the cry in Ramah heard to Bethlehem (for those two cities, the one in Judah’s lot, and the other in Benjamin’s, were not far asunder); but now the prophecy is again fulfilled in the great sorrow that was for the death of these infants.”  Regarding the reference to Rachel, Matthew Henry says, “Some think the country about Bethlehem was called Rachel, because there she died, and was buried. Rachel’s sepulchre was hard by Bethlehem, Gen. 35:16, 19; 1 Sam. 10:2.”

There’s a big difference between the prophecies given by men of God and the predictions made by psychics and fortune tellers.

“A devout believer in astrology, French king Louis XI was deeply impressed when an astrologer correctly foretold that a lady of the court would die in eight days' time. Deciding, however, that the too-accurate prophet should be disposed of, Louis summoned the man to his apartments, having first told his servants to throw the visitor out of the window when he gave the signal. "You claim to understand astrology and to know the fate of others," the king said to the man, "so tell me at once what your fate will be and how long you have to live."

"I shall die just three days before Your Majesty," answered the astrologer. The shaken king canceled his plans!”[iii]

The last reference to prophecy that Matthew makes is in v. 23, which says, “And he went and lived in a city called Nazareth, so that what was spoken by the prophets might be fulfilled, that he would be called a Nazarene.”  Three times in this short passage, the evangelist reminds the reader that all these things were the fulfillment of God’s ultimate design.  While life does involve pain (brought on by our sinful condition and by the Fall), God is ultimately in control.

Finally, God brings people into the desert for a time of Preparation.  This time in exile would prepare Mary for what Simeon had said, “A sword shall pierce your own soul.”   Beginning her marriage and her childbearing years in this difficult way would produce a toughness in Mary and Joseph that they would no doubt need for the rest of their lives.  It would also build resilience and a strong trust in God.  Just as Jesus needed forty days in the wilderness to prepare Him for ministry, often God has used the desert to prepare people for great things.

In light of recent events, I believe that America is in a desert time right now.  It could be that our church is also in a desert time—and we have to trust the Lord for whatever is going to happen tomorrow.  Perhaps you’re in a desert time right now in your life.  Whether God is reminding you of His provision, or whether you’re on probation at the moment, you can trust that God knows what He’s doing.  Listen to the prophetic word that He speaks to your heart, showing you that He has been working for your benefit, and He will continue doing so.  Trust that He will protect you today, and that He’s preparing you for tomorrow.